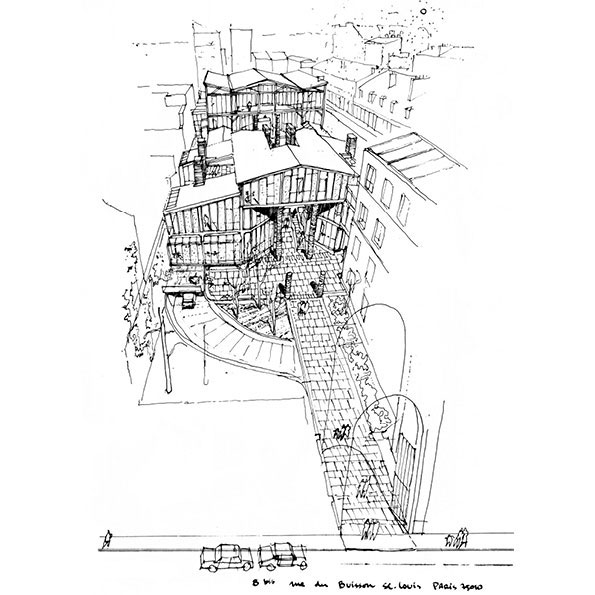 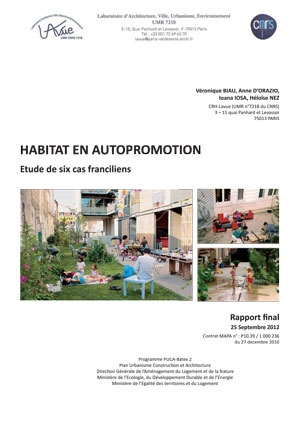 Buisson Saint-Louis, Paris Xe, is an example of an exemplary use of participative architecture.
It is both an architect’s and the inhabitant’s dream come true: at the same time: together design the ideal living environment. The future inhabitants first chose the site, then the architect to interpret their wishes.
The site of a nineteenth century industrial "laundry" house, a permanent little paradise in the middle of a cosmopolitan and working class neighborhood that has never stopped evolving socially.
A long, passionate project, where pasted on rough brown paper, everyone brings, at the architect’s request, pictures of details, of atmospheres, of objects or places that are cherished.
These are discussed together, as well as being integrated into drawings, and models.

A generation was born and raised in Buisson Saint-Louis. These young people don’t want to leave this place. Their parents taught them about self-management. They had to face the tough desire to last by confronting maintenance and management issues. To this day, only one family has left.

It’s a kind of vast and compact nautical like house, a well studied assemblage and labyrinth of apartments wrapped one next to the other, with façades making a large use of glass, opening unto interior and exterior spaces, courtyards, patios, tiny gardens, fountains, stairs, platforms, columns, terraces, ramps, central alleyways, corners and tucked away spaces worthy of a true adventure park for all uses and users.

Today when we again speak about participative democracy, the renaissance of “collective individualities”, alternative ways of thinking, of living, and of living in the world, why not go even closer, and visit this participative architectural experiment full of meaning and humanity?

Situated on a long narrow dense urban lot, the "lavoir" was made up of two 19th century traditional wooden frame structures.
The structural elements of the main building has been preserved and reinforced while the facades have been totally redone.
Foundations, which had been basically insufficient were built.

Rebuilt entirely in wood and masonry, the front smaller building takes up the pre-existing volume.
The apartments are closely interwoven and some link both the front and the rear of the building.
The facade éléments followed the corresponding interior organizations and were designed as to allow the existing wooden structure to be seen.