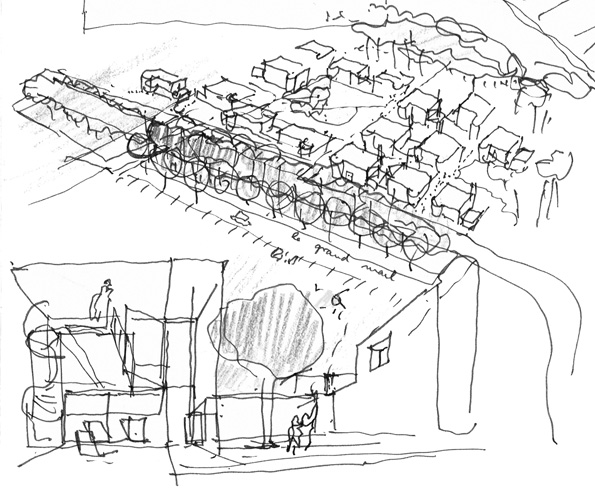 His rental public housing project has been designed following an intensive participatory phase with the future dwellers.
It is composed of five groupings, each around a shared entry courtyard, and organized on either side of the north south landscaped mall.

This housing project composed of thirty rental units, has been built close by the center of the town center of Yzeure to the west of Moulins.
The dwellings are in answer to three essential objectives:
∙ to harmoniously integrate the project within an agreeable urban context,
∙ to present an accessible low cost public housing solution,
∙ to be of good manufacture and adapted to the needs and tastes of the future dwellers.

The successful organization of the participatory design workshop was a proof that the act of building, can be the result of a shared design process.

Yves de Lagausie organized the participatory design workshops which met every two weeks for four months.
After having elaborated, thru models and drawings, several design for the overall project, Bernard Kohn proposed the plan, composed of small housing clusters each grouped around an entry landscaped court, and following the planted mall oriented towards the south and the community meeting hall.
The project is ground and first, built following a structural grid of 4x5 meters which allows for a living room or two bedrooms.
This grid finds extensions to the outside with open beals which are to be a support for plants.

More than thirty years after the project was completed, what may one say ?
∙ the mall which was designed a space of meeting and of play has been planted but on one side, and occupied on the other side by parking,
∙ the shared community space has not been built,
∙ there has not been any real maintenance.

From the start, the Public Housing agency did not really invest itself in this unusual participatory project, and although it is required by law, has not allocated a part of the rents to maintenance and home improvements.